Most Japanese people will have grown up hearing tales about the legend of Japan’s creation, but you may not have heard the story as depicted in the Kojiki, an ancient Japanese collection of myths which portrays how the heavens and the Earth came into being. The first story depicts the creation myth of Japan.

Japan’s Creation Myth – The Birth of Japan from Awaji Island 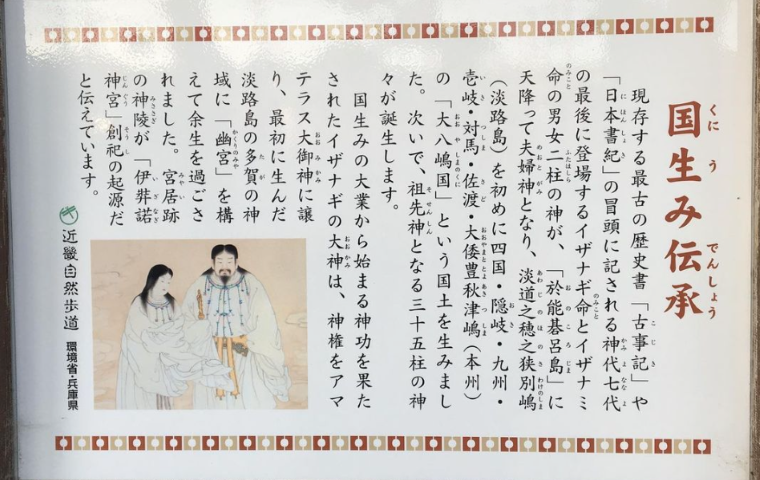 Both the Kojiki and the Nihon Shoki, two of the oldest Japanese semi-historical texts, begin by describing the formation of the world.

Izanagi-no-Mikoto and Izanami-no-Mikoto stood on the Heavenly Floating Bridge and stirred the deep of the ocean with the Heavenly Jeweled Spear. As they pulled up the spear, the drops of salt water that fell from the tip of the spear formed Onokoro Island. The two then married and performed a birthing ceremony, from which sprang forth the rest of Awaji Island. Following Awaji Island, they then created Shikoku, Okinoshima, Kyushu, Ikishima, Tsushima, Sadoshima and Honshu. These eight islands formed Oyashima (Eight Great Islands), an ancient name for Japan.
The Naruto Strait is a sightseeing spot south of Awaji Island famous for its whirlpools, reminiscent of the stirring of the ocean in the Japanese creation myth. Here you can see the awesome force of the whirlpools that were told of in the ancient stories passed down from generation to generation. 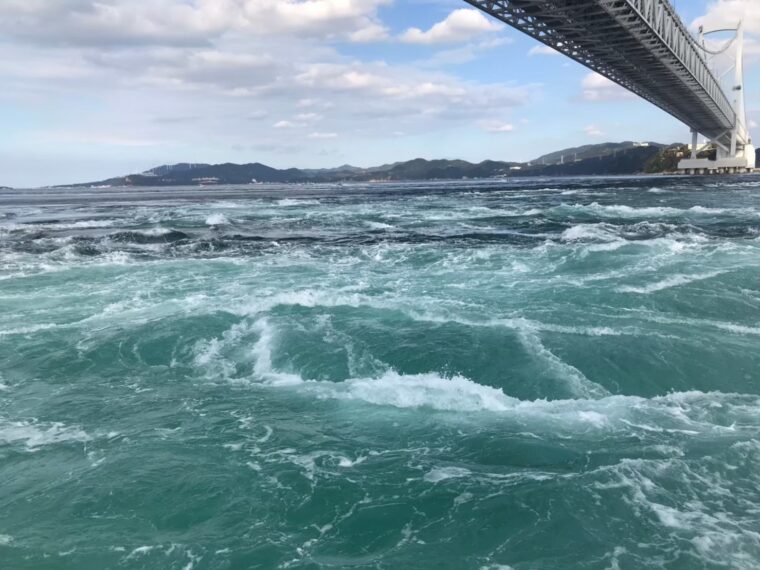 The Naruto whirlpools under the Akashi-Kaikyo Bridge

Izanagi Shrine makes its first appearance in the Kojiki and Nihon Shoki as the location where Izanagi-no-Mikoto and Izanami-no-Mikoto are enshrined. It is also said that Izanagi lived out his last days here.

Onokoro Island Shrine is characterized by the large vermillion-lacquered torii gate. This gate is often counted as one of Japan’s “Three Great Torii Gates”, standing tall at 21.7 meters.

Off the Pacific-facing southern coast of Awaji Island lies a small landmass which is said to be shaped like a magatama, an ancient Japanese bead, from above. This is one of the locations from the creation myth fabled to be Onokoro Island, and its name is said to be derived from the name of the mythical spear Nuhoko, which stirred the ocean to create Japan.

We hope you enjoyed this crash course on the Japanese creation myth and some of its featured locations. For more information, please visit the official sites below.

Refresh and Rejuvenate Yourself amid The Vast Nature of Awaji Island!…

Situated amid the vast nature of Awaji island, on the 135th merid…

Venture into the Dragon Quest Hotel Room on Awaji Island!

You all surely know that Nijigen no Mori, a new type of anime park on…

Did you know the popular glamping facility, Grand Chariot, has charac…

The multimedia art restaurant “Hello Kitty Smile” stands along the we…